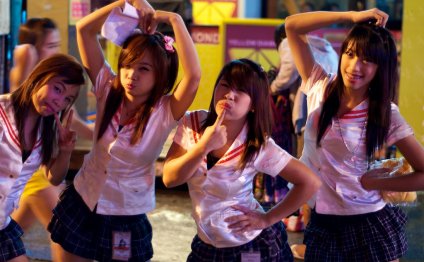 I’m not a sex tourist, so I never had any desire to go to Angeles City. When I landed at Clark Airfield on my way into the Philippines, I bailed on Angeles and went straight to Manila. On my return, I decided to head to Angeles for a night before my flight, mainly because I like to sleep in the same town as the airport the night before an international flight. It turned out to be far easier to get to Angeles from Manila than I expected, and in hindsight I really should have stayed in the big city and bused up to Clark the next day.

Angeles is almost certainly the seediest city in the Philippines. I would venture to guess that it has more prostitutes than Bangkok, even though Bangkok is at least 20 times larger. There were help wanted signs on a lot of the bars, saying things like “Mamasan wanted – must have at least 10 dancers.” It was a weird place for me to be.

In Dumaguete, there are a few classic sex tourists – 52 year old guys with mustaches and pot bellies with a 19 year old on their arms. They always felt a bit out of place though, like they were infringing on my turf. However, in Angeles, I was clearly the fish out of water. This place was the mother ship for these dudes.

I stayed at the Niagara, which was a filthy, dingy dump that was run by extremely nice people that let me check out hours late for free. Plus, it was the cheapest place I could find with air conditioning and wifi. The Niagara also had an attached dive bar, which is always a plus.

I sat down at the bar for a beer shortly after checking in. I planned on having one before catching a nap. It had been a long day – I’d woken up early in Dumaguete, flown to Manila, gotten a bullshit taxi to downtown Manila (when I wanted to go to the burbs. Asshole.), ridden the train to Quezon City, eaten Taco Bell, searched out and taken a bus to Dau Bus Terminal, and taken a tricycle to central Angeles.