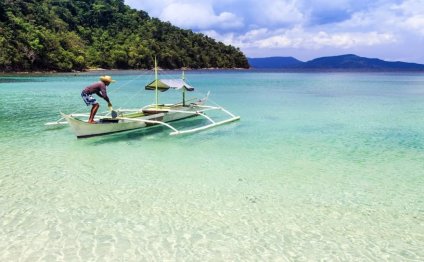 The Philippines is justifiably known for its beaches, but the country isn't just about finding an isolated patch of sand and sinking into a sun-kissed stupor. The 7000-plus islands of the Philippines offer an array of more adventurous pursuits that can raise any adrenaline junkie's pulse. Here are a half-dozen ideas to find the right island for your adventure.

Rugged terrain of all stripes makes the Philippines' massive main island a trekkers' delight. The hiking is best in the northern Cordillera mountains. Camp overnight on peaks such as 2922m Mt Pulag or Mt Napulawan (2642m) and wake up to watch the sun rise over the sea of clouds – a magical sight. Secure guides and camping equipment before you set out and dress warmly, as temperatures drop into the single digits up top. Trekking amid the Unesco-recognised rice terraces around Banaue, Ifugao Province, is an experience not to be missed; while remote Mountain Province and Kalinga Province are great places to visit hill tribes on village-to-village hikes.

Trekking on Mt Pulag. Image by jojo nicdao / CC BY 2.0

Heading south of Manila, volcanoes are the name of the game. With its perfect cone, Mt Mayon (2462m) in southeast Luzon is the headliner. 'Mayon' means ‘beautiful’ in the local dialect, but it's an angry, active beauty. If it's rumbling or threatened by a typhoon don't climb it, as there have been accidents – heed any warnings and exclusions zones that are in place (see the Philippine Institute of Volcanology and Seismology, phivolcs.dost.gov.ph, for volcano alerts). Several additional volcanoes line the nine-hour route between Manila and Mt Mayon along the 'ring of fire'.

Luzon has plenty of additional adventures – surfing on both the east and west sides of the island, wakeboarding, mountain biking, rafting, and kayaking, just to name a few. North Luzon Outdoor Center in hippie-haven Sagada, Mountain Province, organises rafting and other tours in the Cordillera.

Any mention of the island of Samar is usually preceded by the word 'rugged'. Surfers speak in awe of the barely accessible waves on the east coast, while the dense interior forests provide a rare chance to spot the Philippines' national bird, the endangered Philippine Eagle. But caving is by far the biggest draw.

The tours run by Trexplore out of Catbalogan will blow you away. Don your full-body canvas spelunking suit and helmet equipped with a calcium-carbide gas lamp, and follow your tour leader into the abyss. For the next five hours you'll be swimming through underground streams, plunging through karst tunnels, and slithering under low-hanging stalactites. It's the ultimate Indiana Jones adventure. Multi-day underground odysseys are also available.

The Philippines are well known as a top-class dive destination, but the country's best scuba spot is somewhat off the radar of the average visitor. That would be Apo Reef, a glorious, mostly sunken atoll just two hours off the west coast of Mindoro.

While most of the Philippines is known for its colourful macro (small) sea life, Apo Reef is a smorgasbord of both macro life and larger creatures. On some dives you might lose count of how many sharks, rays and sea turtles you spot. For years it was difficult to access Apo Reef because of poor roads leading to the main jumping-off town, Sablayan. Now smooth highways and improved flight connections from Manila to nearby San Juan mean you can depart Manila in the morning and be on the reef by midday with Apo Reef Club, an hour north of San Juan.

While some parts of Mindanao are no-go zones because of safety concerns, the northern part of the Philippines' largest island is considered safe – not to mention scenically splendid and ripe for adventure.

While the big rapids are in North Luzon, the rafting window up there is short. In the northern Mindanao city of Cagayan de Oro, you can raft the Cagayan River year-round on rapids that can reach Class IV. It's equal parts thrilling and scenic, and longer trips involve a lunch and hangout time with your super-cool Filipino rafting guides – CDO Bugsay River Rafting is one of several operators. From Cagayan de Oro you are just a couple of hours by boat to another adventure wonderland, volcano-studded Camiguin.

Rafting in northern Mindanao. Image by jojo nicdao / CC BY 2.0

Palawan is best known for the spectacular limestone formations of the Bacuit Archipelago off El Nido, but several hours north of El Nido by boat is the adventure paradise of Coron. Scuba divers flock to the area to explore several dozen WWII wrecks in Coron Bay off Busuanga Island. The bay is dotted with idyllic islands that provide shelter and good camping spots, and some of the best snorkelling in the Philippines. Sea kayakers can spend up to a week hopping around the islands here, fishing for their food and basking in the serene aura of isolation. Tribal Adventures has quality kayaks and can tailor a trip to your tastes and skill level.

Rocky islets of Coron. Image by Allan Ascaño / CC BY 2.0

The southern Visayan island of Bohol is best known for its diving, but lately it has emerged as the place to try a more new-fangled type of activity: stand-up paddleboarding (SUP). The emerald-green Loboc River slithers through a deep canyon draped in tropical forest – set out early in the morning when the rich birdlife is at its most active. A ways upstream a waterfall provides a perfect backdrop for SUP yoga, which sees practitioners go through yoga poses on their boards.

Entering the country through any of the main ports is a breeze. Most nationalities are issued a free 30-day visa. Customs…

Where the Philippines Came from?

Early History: The Philippine archipelago was settled at least 30, years ago, when migrations from the Indonesian archipelago…