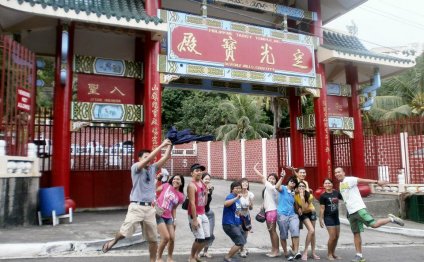 Tourism is one of the major contributors in the economy of the city. The city happens to be the most popular destinations for the travelers in Philippines.
Cebu City is also popular by the name of "Queen City" and is the second largest city of Philippines. The city is connected by most of the countries through flights.

The best way to travel within the city is by taxi. Most of the city taxis are metered. There are many monuments, churches, museums and cathedrals in Cebu City that reflects the rich historical legacy of the city. Cebu City was a Spanish colony for many years, so the tourists can find many interesting places and monuments belonging to that period.

Some of the Cebu City Tourist Attractions are:

Some of the other attractions in and around Cebu City are:

Jumalon Butterfly Sanctuary is one of the most fascinating tourist destinations in Cebu City, Philippines.
Established in the year 1974, this butterfly sanctuary has ever since become the largest crowd pullers in the city. This kind of a butterfly sanctuary is the first in Philippines and the most interesting part is that; the sanctuary does not have any enclosure. As a result, butterflies are seen flying freely in the area. Jumalon Butterfly Sanctuary in Cebu City was the brainchild or rather passion of a famous artist called Julian Jumalon, after whom the sanctuary is named.

The contact detail of the butterfly sanctuary in Cebu City is as follows:

Jumalon Butterfly Sanctuary
20-D Macopa Street,
Basak, Pardo, Cebu City
Casa Gorordo Museum Cebu was the home of Juan Gorodo, first Filipino Bishop of Cebu. Casa Gorordo Museum Cebu is located in Lopez Jaena Steet. At present, the museum houses many old and ancient relics. The displayed relics give a picture about the lifestyle of the Filipino people during the period from 1860s to 1920s.

Old furniture and paintings are also displayed in this museum of Cebu. The courtyard of the museum is very beautiful. The museum premises are well maintained and beautified.

Alejandro Reynes Y Rosales built the house, which became famous as the home of Juan Gorodo in the middle of 19th century. Four generations of Gorodo family have stayed in this home including Juan Gorodo.