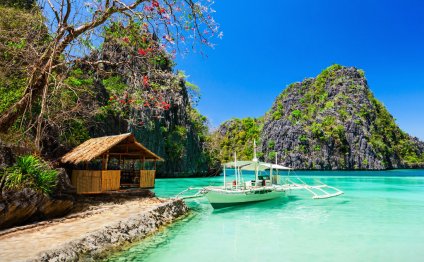 The Philippines exhibits a marked discrepancy in income, living standards and access to basic infrastructure between urban and rural locations, and tourism has been identified as one means of helping to lift more remote regions out of poverty. When considering that natural untouched settings and traditional culture are some of the main drawing cards for visitors to more isolated areas, the impetus is to manage development in a responsible and sustainable manner through principles adhering to the Ecotourism Philippines philosophy.

Indeed, the campaign features prominently in the Department of Tourism’s (DoT) National Tourism Development Plan 2011-16 (NTDP) and is tapped to play a significant role in helping to rebuild the areas that were most devastated by the 2013 Typhoon Haiyan and Bohol earthquake.

ZONING IN: To improve access among a captive visitor base, the NTDP has selected 20 clusters in which more secluded areas possessing ecotourism potential will receive improved road links to established tourism destinations nearby. In 2014 the government planned to spend more than P400bn ($9bn), or 3.1% of GDP, on infrastructure. To support the tourism industry, P14.4bn ($324m) worth of funding is being allotted to the Department of Public Works to spend on the construction and maintenance of 679 km of access roads.

Guiller B Asido, assistant chief operating officer of the DoT’s Tourism Infrastructure and Enterprise Zone Authority (TIEZA) – the agency tasked with identifying and facilitating investment into Tourist Enterprise Zones (TEZs) – referenced the example of the municipality of San Vicente in explaining the methodology being followed. Occupying 14 km of unspoiled white sand beach, San Vicente is set to have its own airport completed in 2015, as well as a highway that should see the drive time to Puerto Princesa – the closest major city and a tourism hotspot located 186 km away – from four to two hours. “The master development plan is in place, and locators (i.e., hotels and other tourist facilities) will be entitled to a range of fiscal and non-fiscal incentives, ” said Asido. “As we have already gotten buy-in from local government, they can also come directly to us for one-stop approvals.”

TIEZA guidelines, in addition to a job creation measurement, call for investments to exceed $5m and cover 5 ha of land to be eligible for the range of incentives on offer. However, the Bureau of Internal Revenue has delayed making these terms official over concerns that the incentives would cut into revenues. Laurent Lamasuta, president and CEO of El Nido Resorts, believes incentives are essential to attracting investment capital, but argues that packages should not be limited to designated areas. He said, “There are many places developers might want to put up properties. TEZs make sense for starting up a specific destination, but it is difficult to designate where a tourist will eventually opt to go.”

As President Benigno Aquino III’s administration has generally been cutting back access to tax incentives, the implementation of a 2009 law meant to grant tax holidays to hotel and resort investors has also faced delays. “Developing a property, especially in a less-developed area, takes up to three years before profits are realised as one needs to invest in transport and other support infrastructure, ” said Lamasuta. “The government, when offering a standard six-year tax holiday, is essentially only pushing back three years of tax earnings. But without the tax break, it risks losing a lifetime of tax revenue from a project that might decide not to enter otherwise.”

ECODIVERSITY: According to conservation group the Tarsier Foundation, of the Philippines’ total land area of 30m ha, slightly over half (15.8m ha) consists of tropical forests. The country boasts impressive biodiversity with 556 recorded species of birds, 180 mammals, and 293 species of reptiles and amphibians, while about 67% of its flora and fauna is endemic. Furthermore, its surrounding waters harbour over 300 fish species and is surpassed by only Australia in terms of seagrass diversity.

In appreciation of the need for marine conversation and the tempering of man-made deforestation, the DoT released a code of ethics for Ecotourism Philippines in 1994, followed in 2012 by the formulation of Executive Order No. 111, an ecotourism strategy that emphasises sustainable management of destinations, education and awareness, involvement of local communities and development of tourism products. The country has been working to secure recognition as a leading player in the field, hosting the 5th World Ecotourism Conference in February 2014 in the island-province of Cebu.

A GREEN REBUILD: According to risk research firm Maplecroft, the Philippines is the most at risk country in the world for natural hazards, and 2013 saw the country hit extremely hard by devastating natural catastrophe. Typhoon Haiyan, which has been labelled the worst recorded storm to ever hit land, tragically brought about the loss of 7000 lives and caused the destruction of 10, 000 homes. It struck areas in Cebu’s northern island where resorts were heavily concentrated, in the process damaging a number of historic churches and tourist sights.

Bohol Island, where tourism is estimated to contribute 20% to the local economy, also suffered the misfortune of having its infrastructure and attractions severely damaged in 2013, this time by a 7. 2-magnitude earthquake that occurred in October. Although the typhoon and the earthquake collectively affected only six of the country’s more than 7100 islands, the events lead to a number of holiday cancellations throughout the country shortly thereafter. About 5% of the DoT’s budget is going towards Ecotourism Philippines development and promotion, while a further 5% is allocated to the rehabilitation and restoration of historic sights. “We are undertaking heritage reconstruction projects for earthquake-affected areas, which also includes a three-year project to digitise, scan and archive historical archives, ” Asido told OBG.

NOT WORKING ALONE: The government’s largest ecotourism project, the Integrated Coastal Resource Management Project (ICRMP), is supported by funding from the Asian Development Bank and the Global Environment Facility. The project has developed 22 ecotourism sites in areas that are largely off the beaten path and mostly clustered around Cebu, Davao, the Zambales region of west-central Luzon, Masbate in Bicol and Cagayan on the northern tip of Luzon. Volunteer tourism is considered a core component within the ICRMP and the overall Eco-tourism Philippines proposition, as it aligns with the ethos of conservation and cultural immersion. It also offers a way to replace visitors who opt to stay away from areas affected by natural disasters with those presenting the added bonus of wanting to contribute directly to reconstruction efforts.