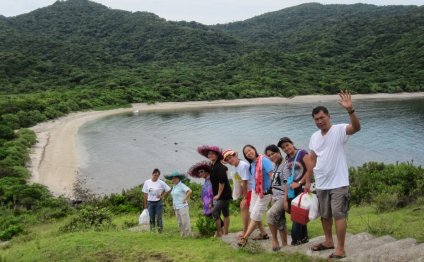 Recently voted as the 10th most beautiful beach in the world by TripAdvisor users, Nacpan Beach is one-half of the renowned “Twin Beaches” (the other being Calitang Beach). Cream-colored sand and rows upon rows of coconut trees — just the way it should be!

How to get there: Fly to Puerto Princesa International Airport and take a van to El Nido with Daytripper Palawan (daytripperpalawan.com) — the journey takes about five to six hours.

The iconic Chocolate Hills shouldn’t be the only reason to visit Bohol. Consider checking out Panglao Island as well, which boasts pristine, picture-perfect sites like Alona Beach.

How to get there: Fly to Tagbilaran Airport, then make your way to Panglao Island, which is linked to Tagbilaran via a causeway. The journey takes around one hour.

Although you might not realize it, you know Caramoan already: located in the province of Camarines Sur in Bicol, it has been featured several times on the hit reality TV series Survivor. Its most popular beach, Gota, is well known among divers and snorkelers, who spend hours exploring its cool azure waters.

How to get there: Fly to Naga Airport and head to the port of Sabang. From there it’s a two-hour ferry ride to Guijalo in Caramoan.

The best-known destination on this list, Boracay is a world-class holiday hotspot for beach bums, watersports enthusiasts and partygoers. The beautiful 4km-long White Beach is your best bet, but you can also check out the more low-key Bulabog Beach and Puka Shell Beach.

How to get there: Fly to Godofredo P. Ramos airport in Caticlan and make your way to Caticlan’s port. Thereafter, it’s a 10- to 20-minute boat ride to Boracay.

Escape to the quiet fishing town of Sipalay in Negros Occidental and visit the unspoiled Sugar Beach. It’s a great option for those who want to get away from the crowds for some serious rest and relaxation.

How to get there: Fly to the new Bacolod–Silay International Airport and take a bus or taxi to Sipalay (roughly four hours).

How to get there: Fly to Mactan–Cebu International Airport and catch the public ferry (a one-hour trip) from Hagnaya port to Santa Fe.

Powdery sands, towering volcanic rocks, blue-green waters – this is what Palaui Island is all about. There’s plenty to do here, including trekking and island-hopping, but since Siwangag Cove made CNN’s ”World’s 100 best beaches” list in 2013, it’s obvious where you should be most of the time.

How to get there: Fly to Tuguegarao Airport and make your way to Santa Ana, which is three to four hours away by car. Then, it’s a 30-minute boat ride from the port of San Vicente to Palaui Island.

Siargao may be known as the surfing capital of the Philippines, but you don’t need to be a surfer to enjoy the island’s blue lagoons and sandbars. The beach town of General Luna — especially the world-famous surf spot, Cloud 9 — is where most people flock to, so set up camp here either to ride the waves or watch them roll in.

How to get there: Fly to Sayak Airport in Siargao; General Luna is approximately 45 minutes away by car.

There are several beautiful stretches of sand on the island of Romblon, such as Bon Bon Beach and Margie’s Beach, but Tiamban is highly recommended because unlike the other two, you can stay the night and watch the starry skies by the water. Basic facilities are available and camping is allowed for a small fee.

How to get there: Fly to Manila’s Ninoy Aquino International Airport and drive to Batangas port, which is around one to two hours away by car. Catch the overnight boat to Romblon Island (do note that travel time is approximately 10 hours, so you might want to load up on the snacks!).

Most people think of Siquijor as a mystical island of sorts, as it’s often associated with spirituality and folk healing. However, many don’t realize that Siquijor is also a treasure trove of white-sand beaches. Case in point? Salagdoong Beach, a stretch of clear waters and intriguing limestone formations.

How to get there: Fly to Sibulan Airport in Dumaguete and take a one-hour ferry ride to Siquijor from Dumaguete’s port.