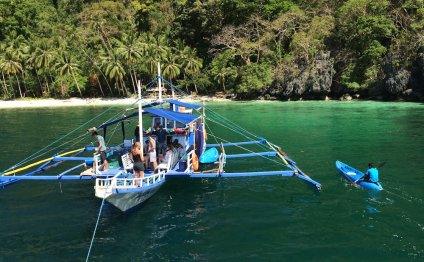 Tips for Getting Around Safely

For traveling throughout this magnificent country and its surrounding islands, there are some basic precautions to keep in mind when deciding which mode of transportation is best suited for you - and the safest.

First, a top travel tip for the Philippines: most modes of transportation don't carry a fixed priced, so hone your haggling skills.

General warnings about travel:
• It is best not to accept rides in private vehicles from strangers even if they appear legitimate.
• Hitchhiking is very risky and should be avoided.
• Petty crime (especially pickpocketing) is widespread, so take notice of your surroundings at all times.

Jeepneys are vehicles originally made from military jeeps left in the country after World War II and are a fun option for travelers. Although it will be an adventure to ride in a Jeepney, there are safety and security concerns for this mode of travel. Jeepneys are often very crowded and thus, a pick-pockets dream. Check out our other tips about crime in the Philippines and how to avoid it.

The European Commission recently announced it had lifted an operating ban on Philippines Airlines after the company was certified to have met international safety standards.

Not all airlines in The Philippines are the same. Travel on local airlines can be very risky and should be avoided whenever possible.

Renting a car in the Philippines

If you choose to rent a car, be mindful that the roads are crowded and drivers are undisciplined. Driving off the national highways and paved roads is particularly dangerous, especially at night, and should be avoided.

Due to heavy traffic in Metro Manila, certain areas of the city have laws that restrict certain vehicles based on the day of the week and the ending number of your vehicle's license plate. Be sure to check with a local contact, car rental agency or hotel concierge about whether these rules will apply to your vehicle in order to avoid becoming the target of less scrupulous traffic aides.

Taxis are the recommended form of public transportation and are quite inexpensive. Keep in mind that many drivers try to rip off tourists so make sure to point to the meter as soon as you open the door, so the driver understands that you won't ride without the meter on. Keep the doors locked and windows up when inside a taxi, as beggars may reach in and grab your belongings at a red light. Also, do not enter a taxi if they have already accepted another passenger. To ensure safety, it is wise to make a mental note of the license plate number should there be a problem.

This unique Filipino mode of transport is truly an adventure. It is a loud motorcycle with an attached sidecar which can be hired from busy market places and cities. Hold onto your hat as you bounce along bumpy roads while being tossed around in the side car. A word of warning is in order as these vehicles are not regulated and often don't have seatbelts, raising your risk of injury.

This is a great mode of travel for the adventurous type, but of course carries with it a certain amount of risk. Sharing the road with cars on the crowded busy streets often riddled with potholes can result in serious injuries so proceed with caution.

Public buses operate in the main tourist areas and can be a good option for the traveler who does not mind an uncomfortable ride. Beware though, as drivers are known for racing their rivals along the bumpy and winding roads presenting a real safety risk. There are also smaller versions of buses known as "baby buses" which are also very popular modes of travel. Keep in mind that the drivers do not strictly adhere to the posted schedules often departing earlier so arrive with plenty of time to spare.

Are The Trains Any Good?

Light Rail Transit (LRT) is the most modern form of transportation. It is a time-saving and inexpensive mode of travel and is utilized by most locals on tight schedules.

Metro Train - this form of travel should only be utilized by travelers willing to while away the hours waiting to reach their destination. It is not a popular mode of transportation for the natives due to the often long and interrupted routes complicated by damaged bridges and railways routes.

(We are not saying this delightful craft is inherently dangerous, it may have a perfect safety record. It's also most likely to have been retired by now and replaced by a modern catamaran - we hope.)

Sea travel in the Philippines can be hazardous. Traveling by ferry is not recommended due to safety concerns. Ferries are often overloaded, lack necessary lifesaving equipment and are not adequately maintained.

Pump boats are often used for short trips between islands but this type of travel is only suitable for those prepared to rough it out. Remember that storms can develop quickly and can be very dangerous.

In addition to these safety issues, there is a high incidence of piracy and armed robbery against ships in and around Philippine waters. If you choose to utilize this mode of transportation prepare accordingly by checking travel forums and websites for updated information on companies with reliable reputations.

Travel Around the Philippines goes to Tagaytay City