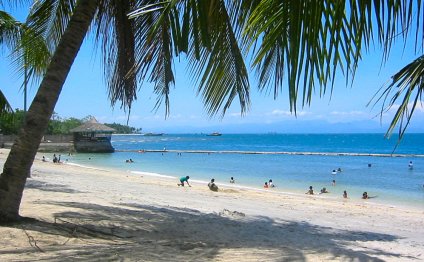 The Battle of Mindanao was fought by United States forces and allied Filipino guerrillas against the island in the Philippine Archipelago, in a series of actions officially designated as Operation VICTOR V, and part of the campaign for the liberation of the Philippines during World War II. The battle was waged to complete the recapture of the southernmost portions of the archipelago and secure them from remaining Japanese forces.

The campaign for Mindanao posed the greatest challenge for the liberating American forces, primarily for three reasons: the island's inhospitable geography; the extended Japanese defenses; and the strength and condition of the Japanese forces, which contained the significantly remaining concentration of combat troops in the Philippines.

Like most of the Philippine Islands and other similar places the U.S. Army operated elsewhere in the Pacific, the geographical conditions of Mindanao, the second largest island in the Philippines, offered very little inspiration for soldiers who would have to fight there. It boasted a long and irregular coastline, the inland topography generally characterized as rugged and mountainous. Rain forests and numerous crocodile-infested rivers covered the terrain, the rest by either lake, swamp or grassland. These grassland regions—along with dense groves of abacá trees, source of hemp fiber—offer the worst obstacles which limit vision and sapping the strength of soldiers who would have to force their way through.

The few roads in Mindanao further complicated the problem of movement. Two of these, was the generously named Highway 1, which cuts across the southern portion of the island, from just south of Parang on Illana Bay in the west to Digos on the Davao Gulf in the east and then north to Davao. The other, Sayre Highway the main north-south road, starts at Kabacan, midway between Illana Bay and Davao Gulf, then runs north through the mountains of Bukidnon and Macajalar Bay (off Misamis Oriental Province) on the northern coast.