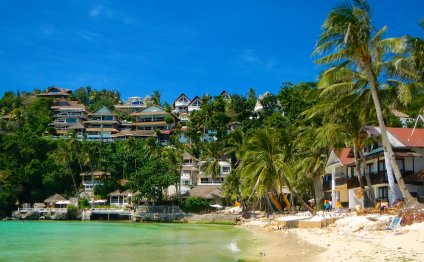 Naranjo Islands (also known as San Vicente Islands) lie 12 13' North, 124 02' East in the east central periphery of the Philippine archipelago. This group of islands is bounded by Sorsogon in the North, Ticao Island in the West, Masbate in the Southwest and Northern Samar in the Far East. It is approximately 10 nautical miles from the Pacific Ocean and sits near the entrance along the Paso de Acapulco, otherwise known as San Bernardino Strait.

Naranjo Islands consist of six islands formed in a circle cluster with Medio Island at the center. The other islands are San Andres, Rasa, Darsena, Aguada and Escarpada. This group of islands lie within a volcanic belt that has been active for the last 5 1/2 million years and stretches from Southeastern Luzon to Southeastern Mindanao. This volcanic belt includes the active Mayon volcano in Albay.

The circular pattern of the islands and the volcanic composition suggests the group represents the remnants of a submerged volcanic cone which may have formed during the last ice ages when sea level was lower. On the other hand, it could have formed underneath the ocean itself. Medio Island, the center of the group of islands, could be the dome of this extinct volcano.

This group of islands have been the last stop for victuals by the Spanish galleons before their long journey to Acapulco, Mexico.

The islands are presently utilized as coconut plantations.

In May 2007, REPUBLIC ACT NO. 9458 [H. No. 786] - An Act declaring the island towns of Biri, Capul, San Antonio and San Vicente (also known as Naranjo Islands), all in the province of Northern Samar as ECO-TOURISM ZONES, was passed.

Medio Island has many natural assets that would make it an ideal first class island beach resort. It is a 40.1123 hectare island of gently rolling hills, mostly of coconut vegetation and shrubbery. The highest point of the island is on its northern portion with a maximum elevation of 65 meters above sea level.

Medio Island is approximately 1, 300 meters long (SW to NE), 550 meters wide at its widest point and some 330 meters at its narrowest portion. It is blessed with 3 beaches that could serve a variety of purposes. Its main or South beach of fine white sand and corals is about 300 meters long and 60 meters wide. The North beach on the opposite side of the island is approximately three quarters long compared to the main beach and is more secluded. The West beach on the far end has a small extended portion on the West side and is about as long as the main beach. It is separated from the main beach by a lava rock formation. This beach has the best coral bed among the three beaches.

The Southern portion of the island has the least vegetation while the Northern part has the most number of coconut trees. Small trees, shrubs and cogon grass also on the North and West side of the island. Volcanic and lava rocks are visible around the islands.

The island is capped by a gently rolling hill ideal for resort cottages and appurtenances. Mainland Luzon, Samar and Masbate with their airports are only 30 minutes by speedboat and 1 1/2 hour distant by motorboat.

With their coral reefs, Medio and sister islands Rasa and San Andres are ideal for scuba, snorkeling, sailing, yachting, jet skiing, parasailing and marine life observation. Medio, Rasa and San Andres islands are the only remaining islands of economic size with complete privacy in this area of the Philippines. As a base for island hopping, sheltered from the NE tradewinds and SW monsoon; and calm during most of the year, the islands are unsurpassed.

Medio Island is one of the three islands owned by the heirs of the late Martin Palacio of Northern Samar, Philippines. The…