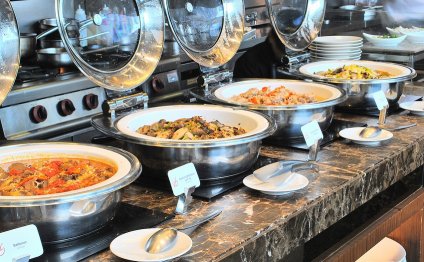 The Philippines is an archipelago of over 7, 100 islands extending about 1, 150 miles from north to south between Taiwan and Borneo, and about 700 miles from east to west. These islands lie off the southeastern coast of the Asian mainland, across the South China Sea and are in a strategic zone between China, Taiwan, Borneo and Indonesia that has made the islands of the Philippines a cultural and trading crossroads over the centuries. Of these 7, 100 islands, the eleven largest islands comprise over 90% of the total area; only 460 of the islands are larger than one square mile and about 1, 000 are populated. With these numerous islands, the Philippines has one of the largest coastlines of any country with about 22, 549 miles of coast; this coast is irregular with many bays, gulfs and inlets, which create many natural harbors and enhance both trading and fishing. Manila Bay has a superb sheltered harbor and is thus the most economically important bay.

The Philippine islands are naturally divided into three main geographic areas: the northern islands of Luzon and Mindoro ; the central islands of the Visayas and Palawan, and the southern islands of Mindanao and the Sulu Archipelago. These three regions are represented by the three stars in the Philippine flag. The two largest islands: Luzon and Mindanao together make up two-thirds of the total land mass and only nine other islands have an area of more than one thousand square miles.

The topography of the Philippines is largely mountainous with extensive coastal lowlands. The larger islands have a more diversified landscape including fertile river valleys in the interior. Only about nineteen percent of all the land in the Philippines is arable and today fifteen percent is cultivated. This includes the important rice-growing region of the Central Luzon Valley as well as the mountainside rice terraces that have been cultivated for hundreds of years. The inland plains and valleys are the most densely populated areas. Formed by volcanic action in the past, these islands contain about twenty active volcanoes. While most of the islands are clustered in a north-south direction, the long narrow island of Palawan and the nine hundread small islands of the Sulu archipelago extend southwest toward Borneo . It is believed that Palawan Island was the first Philippine island to be inhabited by Southeast Asian migrants during prehistoric times.

Best of the Philippines

How to take a World’s Best trip to Boracay, the Philippines. The Trip Now that even tiny islands such as Koh Samui are becoming…

What country are the Philippines in?

Over the last few months, I have used oDesk to hire a couple of virtual assistants, who help me with a variety of tasks…