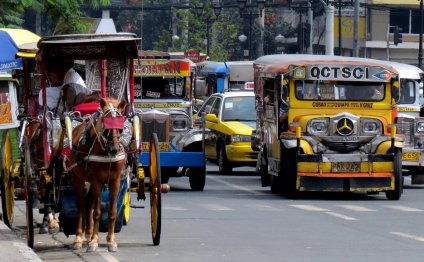 Terminal 1 is called the Manila International Airport, commonly known as the Ninoy Aquino International Airport (NAIA). It caters to domestic cheap flights to Manila to and from other local provinces and cities. The newer Terminal 2 is called the Centennial Airport, which accommodates bigger airplanes and international flights. Taxicabs are usually available from the Manila Airport to and from all points in Metro Manila. Jeepneys and buses also have a route to the airport. The NAIA is conveniently connected to the Light Railway Transit that travels around the metro area.

Going around Manila’s tourist destinations is no problem at all. You can take a metered taxi with flag down rates at P40. Beware of taxi drivers who do not use the meter, as this is illegal. If you are staying at a hotel, ask the front desk to arrange a taxi for you.

Buses are usually cramped but they cover routes outside the metro. Waterbuses travel along the Pasig River. For the adventurous, jeepney rides are a must. Jeepney fare starts at P7 for the first few kilometers. It is not wise to take the jeepney when you’re bringing expensive cameras or when you go out at night.

Cheap airfare to Manila has optional day tours to tourist destinations. Manila is the Philippine capital and there are many historical places for sightseeing. Intramuros, the walled city during the Spanish Era, is home to the centuries-old Manila Cathedral, cemeteries, and museums. Binondo, or Manila’s Chinatown, is one of largest in the world, where Chinese-Filipino families reside and set up stores selling China-made products. Binondo also has excellent Chinese restaurants. Shrines honoring national heroes are found all throughout Manila. Stroll around the Luneta Rizal Park where the national hero Jose Rizal was shot. The Mabini Shrine, the Bonifacio Shrine, and the Malacanang Palace are also places of historical interest.

Manila is a melting pot of cultures, so it is no surprise to find fusion of cuisines. The Filipino palate is a mixture of Spanish, American, and Asian influences. There are many first class local restaurants, and even American fast food chains compete with Filipino brands like Jollibee and other Filipino-owned restaurants. Almost all restaurants serve rice, a Filipino staple. There are plenty of local and international coffee shops in commercial centers and malls. For wholesale shopping, head to Chinatown. Tiangge or market stalls in Greenhills and in Tiendesitas have good retail bargains. Manila has a bustling nightlife. Restos and bars are filled with young professionals and tourists every night.

Travel to Manila Philippines - Stay at a Condo Rental to ...