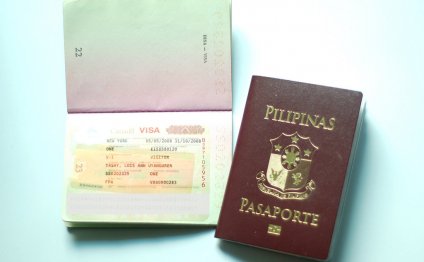 I got my first visa denial when I was 6 years old.

I stood in line with my dad at the US Embassy in Cebu dressed in my Sunday's best, a pink dress and matching stockings. Dad had been to the US several times and he wanted to take me to see relatives from his side of the family in New Jersey. Mom was pregnant with my sister and couldn't come with us. I smoothed out the pleats on my dress many times to keep them from wrinkling.

Our turn finally came and Dad handed the consul a thick Manila envelope filled with documents. Then he carried me so I could give a wide, gap toothed smile to the consul.

He glanced at me for a second then asked, "Where's her mother?"

"She's back at home in Davao, pregnant with our 3rd child. She couldn't travel with us."

My dad showed him a document on top of the pile. "Here's a waiver that she signed allowing me to bring our daughter to the States."

The consul didn't even look at it.

"That's worth 25 cents, anyone can just fake that. Next!"

20 years later, I was at the US embassy in Manila applying for my first visa on my own. I sat on a plastic chair while waiting for my number to be called. A girl beside me who was impeccably dressed was also holding a small piece of paper with a number and it was damp with sweat. She looked at all the application windows fearfully.

I looked at her tattered Manila envelope which was twice as thick as mine.

"I hope I don't get that 'Korean' woman again", she said in a low voice while glancing at the 3rd window that framed a woman with pencil thin eyebrows, chinky eyes, and what looked like a permanent scowl on her face. I observed every person who walked up to her and they all had a disappointed look when they left.

My number was called- for the 3rd window.

"I work in corporate training." She gave me a blank stare that dared me to go on.

"Basically, I train people to do their jobs. These topics can range from company culture, customer satisfaction or time management."

An even colder stare. "Show me."

While in New York, my relatives wanted me to go on a trip to Niagara Falls with them. I was very excited for my first North American road trip except for one thing: they wanted to go all the way to the Canadian side of Niagara Falls which is supposed to be "the prettier side".

I needed to get a Canadian visa.

Being the eternal optimistic that I was, I went to the Canadian embassy in New York with only my passport and application form in hand.

The consul was incredulous when I stepped in front of his window for the interview.

"Let me get this straight. You are a single Filipino woman in the US, applying for entry to Canada with no job here, no permanent address, no bank account and nothing whatsoever that ties you to your country- and you expect me to grant you a visa?"

"Well yes. I only want to visit Canada to see Niagara Falls. I heard it's more beautiful on that side."

"There's no question about that", he said. "It is more beautiful on that side. But how can I guarantee that you won't overstay?"

"Well, as I've said. I only want to see Niagara Falls."

"Where did you get your nursing degree?", he asked.

His question took me aback. I was shocked and exasperated.

"I don't have a nursing diploma. I don't even want to visit Canada! I'm more interested in Europe. I only want to go on a road trip with my family to see Niagara Falls!"

"First of all, I took up Political Science and not Nursing. And second of all, I'm not interested in living in Canada. It's too cold there."

"Say that again and you will never set foot in my country!", then he walked away.

I'd finally done it. I had ruined my chances of getting a visa because I spoke my mind.

Incredibly, he returned a minute later and handed me back my passport.

It had the Canadian visa.

"I'm only granting you the visa because if I gave you a denial, you won't be able to get a visa for Europe."

2 years ago, I was invited to fly to Spain to join 4 women travelers for the Girls Who Run With Bulls challenge. I was able to get sponsors to cover for my flight and accommodations.

There was one hitch: I had to secure a Schengen visa.

I felt very positive at the time, having already been granted a Schengen visa previously from the German consulate. Plus I had 2 Spanish friends who personally vouched for me through letters of recommendation from their city hall. I also had more than enough funds in my bank account to cover for the trip.

At this point, I had already applied for many visas and was confident I could answer the consul's questions. Except one.

"How much money do you make a month?"

"How much? Uhmmm... I just started freelancing so frankly, I don't know."

That ended the interview and you can easily guess the outcome.

Read my full account on How My Spanish Dreams Came Crashing Down.

The reality is, traveling with a Filipino passport poses a lot of challenges. We often face discrimination because sadly, a lot of Filipinos are illegal immigrants. We also need to apply for visas to a lot of countries and that means we generally have to apply for it in the Philippines (reducing the ease of travel). As of this year, the most powerful passport in the world, Finland gets visa free access to 173 countries. Filipinos only get 58. We also need to secure visas way in advance and spend a lot of money on application fees.

But I don't think that this should stop us from traveling. Yes, it's more difficult. Yes, it makes travel more expensive. Yes, we feel restricted, frustrated and powerless, even. But it should not stop us from exploring the world. I know a lot of Filipinos carrying a Philippine passport who still travel despite the odds. I even know of people from less privileged countries who travel as an act of defiance.


“It's not about the cards you're dealt, but how you play the hand.”― Randy Pausch
There are no guarantees in life and there's nothing we can do to make sure we get a visa.

But here are some suggestions on how you can increase your chances of getting approved:

1 Be meticulous and gather all the necessary documents at least a month before your interview. Carefully fill out forms and always be honest.

2 Do your research well and ask others who have recently applied for the same visa for some tips and advice.

3 If you have previous visas and entry stamps from other countries, this may increase your chances of getting approved.

4 If a travel itinerary is required, go to a reputable travel agency. The agent can provide you with a reservation and itinerary for a small fee (around 10-15 USD in my case) without getting charged for the ticket yet. Once your visa gets approved, you can pay for it. To save money, book the flight online once the visa gets approved. But make sure you get the same exact itinerary as most consular offices verify that.

5 Practice the application interview with a friend. Prepare some questions that may be asked. The more confident you seem, the more credible you will appear. Make sure you have memorised all the details of your trip (i.e. accommodations, contact person, reason for visit).

6 Dress for the part by wearing something simple and professional looking. But don't overdress- this can be seen as an act of desperation.
Source: www.wearesolesisters.com