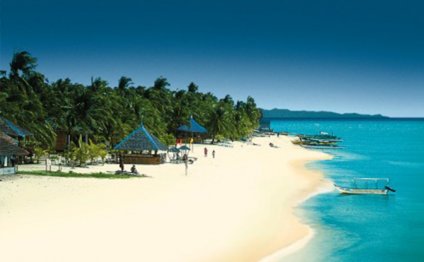 Cebu is one of over seven thousand islands in the Republic of the Philippines. Cebu City is the provincial capital; the metropolitan area is second only to Manila in population. Measuring just 27 miles wide and 155 miles long, the island has four other cities and 48 smaller towns, with beach and resort activities nearby.

The Marcelo Fernan and Osmena bridges span the Mactan Channel and connect Cebu City to Mactan Island. Mactun-Cebu International Airport (mciaa.gov.ph), just fifteen minutes from downtown Cebu City, is the country’s second-busiest airport. Nicknamed the “diving mecca of the south, ” Mactan’s beaches are on the island’s east side. Among the numerous beachfront resorts are Cebu White Sands at Maribago Beach (whitesands.com.ph), the Cordova Reef Village Resort (cordovareef.com) and the Shangrila Mactan Island Resort and Spa (shangri-la.com). For a fee, unregistered guests can enjoy beach activities. Marigondon Beach, popular with local residents, is a public beach.

Located in the Camotes Sea, Hilutungan Island is approximately five miles from Mactan Island. From the international airport to the port of Cordova is a 20-minute drive; the boat ride from there to the island takes an additional half hour. Accommodations at the Island and Sun Beach Resort (islandandsun.com) appear to be floating above the sea; the resort is built on stilts. The nearby Olango Island Wildlife Sanctuary (olangowildlifesanctuary.org) has the largest population of migratory birds in the Philippines. Olango Reef draws guests looking to snorkel from Hilutungan’s beach; at low tide, it is possible to walk to five coral islands.

Just south of Cebu City, Talisay is known as “the aqua city.” In 1945, American military forces made a landing on Talisay’s beach that ultimately led to the surrender of occupying Japanese forces. Mock reenactment battles are part of the annual festivities that commemorate the landing every March. Although its sand is not pure white, Larawan Beach is popular with locals. Food vendors and beach-side restaurants sell sweet potato snacks known as camote, ice drops, konsilba - banana chips in syrup - and mangoes.

Southwest of Cebu City on the Tanon Strait, Badian Island is home to the Badian Island Resort and Spa (badianhotel.com). From Cebu City, the island is reached by helicopter, a journey of approximately 25 minutes. Two white sand beaches are privately owned by the resort; the main beach is close to guest accommodations, while Coral Garden beach is a five-minute boat ride away. The resort’s beachfront dive center is open year-round with instruction for scuba divers of all levels. Among the beach activities are volleyball and badminton, and guests can rent windsurfing boards and paddleboats.