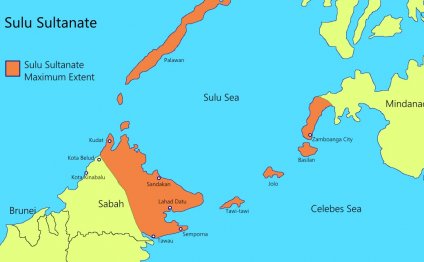 The archipelago is geographically subdivided into several groups, most significantly those around the main islands Basilan, Jolo and Tawi-Tawi. There are, however, other groups containing mostly small islands; not all of these are inhabited:

The Sulu Archipelago was part of Majapahit Empire and mentioned in the Negara Kertagama by the name Solot.

The ongoing conflict against the Spanish reflects the tenuous grip of colonial Spanish East Indies rule over the Sulu Archipelago. The region was part of the Islamic Sultanate of Sulu, founded in 1405. Spanish military expeditions against the sultanate were launched over the centuries of the colonial Philippines period (1565–1946). The Moro Rebellion (1899–1913) independence movement continued the Islamic Moro conflict, against the United States occupation in areas of the Moro people in the archipelago and southwestern Philippines.

The Sulu Archipelago was part of the Islamic Sultanate of Sulu, founded in 1405 by Shari’ful Hashem Syed Abu Bak’r. The sultanate also included portions of Borneo, Mindanao, Palawan, and other islands in the region.

From the first Spanish encounters with Jolo island, the Spanish–Moro conflict met firm and organised resistance from the Sultanate of Sulu. Miguel López de Legazpi had established a colony in Cebu in May 1565, however the initial focus of the Spanish conquest to establish the Spanish East Indies was northwards. In June 1578 Francisco de Sande, Governor-General of the Spanish East Indies, dispatched captain Esteban Rodríguez de Figueroa and the Jesuit priest Juan del Campo and the coadjutor Gaspar Gómez to Jolo, resulting in a negotiated compromise where the Sulu sultan paid a regular tribute in pearls. The following year, Figueroa was awarded the sole right to colonise Mindanao. In 1587, during a campaign against Borneo launched by Sande, Figueroa attacked and burned down Jolo. The Spaniards left Jolo after a few days.